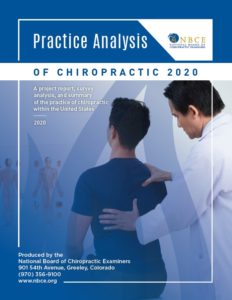 The Analysis provides legislators, insurance companies, educators, and the general public with an overview of the chiropractic field and its effectiveness as a healthcare profession. Over the years, these updated summaries of the chiropractic profession help determine the content of NBCE’s licensure exams. In 2020, for the first time, the practice analysis contains information about the graduates of chiropractic programs who do not practice chiropractic and those who practice part time.

Doctors of Chiropractic were invited to take the survey online with all graduates of chiropractic programs encouraged to provide input. Survey respondents reported information on their daily tasks and professional responsibilities. The survey included questions about the types of conditions chiropractors see in their practices and the frequency and management of those conditions.